Miami is not just a seaside resort 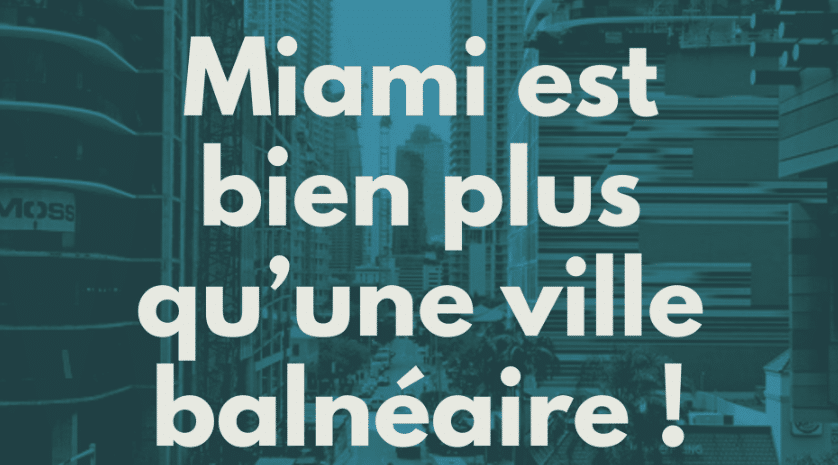 Miami is more than a seaside town!
For 10 years, Miami has been facing a rapid cultural development that has not been fully followed by the rest of the world. That's why people mistakenly think that Miami is not a "serious business city" where you can only go on vacation.

Miami is no longer just a cool vacation spot. A strong cultural identity has been created and "developed" over the past decade. As a Miami resident, I have experienced the profound changes in my city over the last 10 years. When I have to mention Miami to my clients, I'm talking about art, sports, entertainment, business, food, transportation, which are just a few examples of the profound changes in the city. Nevertheless, this is not the opinion of everyone.

What are your first thoughts when you think of Miami? I'm pretty sure that if you do not live here, you think party, beach, shopping. Am I right? Miami is so much more than that ...

First, let's start with the artistic side of Miami. Take the example of the Perez Museum of Art (PAMM). It opened only 9 years ago and since then has been an example for modern and contemporary art exhibitions around the world. There is also the Adrienne Arsht Center. A cultural center in downtown Miami, which hosts opera and ballet concerts. This place opened to the public in 2006 and since then it has been the center of the city's artistic shows. Art Basel is just another example. It was inaugurated in 2002 and is now one of the most important art festivals in the world. Not to mention the neighborhood of Wynwood which is museum district on its own.

For the majority, the most surprising development of Miami is its economic context. There are more than 170 multinational companies based in the city, all in industries. Miami has an employment growth of 42.7% in 2019, compared to the US national average of 33.5%. It is the 17th world economy. And we can also mention that Miami is on the podium of foreign investments. The fiscal environment is conducive to the growth of startups, the establishment of international branches in the city. Miami is now a big American financial center!

People are just starting to notice that Miami is a growing city and that's why more and more people are trying to settle there every day (250 people move to Miami every day). The diversity in Miami is incredible! 100 languages are spoken in the city, more than 59% of residents are born abroad. It's the magic of this place.